Warhammer 8th - a quick spin with the new rules

A trip to Warhammer World. An excuse to learn how to play Warhammer 8th or what I term "Rockethammer". Is it as good as they think it is?

(did I mention that the Purple Sun Paradox is a bad idea for magic?)

Anyway, having special access meant bringing no army to Warhammer World wasn't the worst thing. A quick word with the staff, and off we were with 2 very unequal but very pretty armies.

So, A chaos force went off, to fight a High Elf Prince, around a very abandoned Empire Town. The terrain just called for it...

and now, in all it's prettiness - the battlefield. Very very pretty. Notice all those fences? They truly get in the way later. Oh, and lots of thanks to Kevin Chin of Studio for rule discussions and clarifications during the battle!

So, With a lot of assistance from BattleChronicler, an attempt at that wonderful battlefield drawings you see in every White Dwarf was attempted. However, using a new tool for the first time lead to turn report being rewritten enough times to say - "needs more practice." So, the wonderful tool that is the Battle Chronicler was used here for the image generation.

Apparently it can save an entire battle report to HTML for quick posting online (though how that would work with the image linking... needs thought? perhaps discussions with Blogger/Picassa etc? Needs more research.)

Anyway, on to the quick report and thoughts about how 8th will affect those who already know how to play Warhammer Fantasy Battles (This does not affect those that don't and start from 8th.) 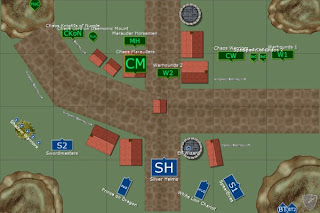 Hmm... a pretty map. Yes. You can save your armies in Battle Chronicler. Unit sizes are all scaled to fit. Wonders of modern xml technology. Note: this version used Microsoft's .NET4.0 framework. Cutting edge stuff!

So if you click on the map on the left you should be able to see a slightly larger image. You can edit just about everything on that map, from unit descriptions to the size of the terrain, roads, buildings and all that. Wonders. How precise do you want your report? It can go down to the inch or centimeter. Go for it.

The mission was the one that dealt with break points. Your army has a break point (1 per 1000 points of units) and once the army fortitude falls to or below the break point, the game is over. Makes for sudden death? A general provides 2 fortitude, and each banner 1 more. At the start, the Chaos army started with 6 fortitude, and the High Elves with 5.

Now since I don't have TJ's point on view on his deployment, I shall try my best to see things from his view.

The High Elves set up with the Bolt Throwers holding one hill. True line of sight. How will this affect 8th? Well, it was horrible trying to shoot anything with all those pesky Empire buildings in the way. So the decision was to anchor a flank with the bolt throwers, and keep the SpearElves and Chariot as a counter-charge to deal with anything coming down that flank.

The Silver Helms held the center of the road out of (into?) town, preparing to march along the relatively wide roads to support either the left or right flanks where necessary. Swordmasters anchored the left flank, with the Shadow Warriors hiding in the forest of dodgy-ness. (it had some dangerous effect that had the Shadow Warriors wanting to leave it as soon as possible!). The elf prince sat on his enormous mount behind the Helms, preparing to support either flank's push.

On the Chaos side, Chaos Warriors dared the Bolt throwers to hurt them, whilst the Marauders decided wisely to garrison (hide?) in the building. The Chaos Knights held their right flank, with the Chaos Lord, while the warhounds provided support for the two Chaos Spawns on their left flank.

The High Elf wizard brought along a single bound item. How does this work with the new magic phase?... hmmm... So he climbed to the top of the tower, giving him good True-Line-Of-Sight to many things, and fortunately, rolled two useful High Magic spells of Arrow Attraction and Fury of Khaine. The Marauder Horsemen just kep5 TLOS through the buildings as the Silver Helms watched. 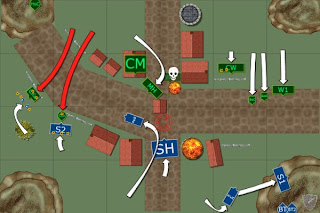 That is, BOOM. With this new charge bonus, units were getting to grips with each other on turn one. Did I mention deployment was only 18" apart?

The smart wizard used his bound item, drawing out some dispel dice. He then cast Fury of Khaine, immolating the warhounds on the road. Flushed with confidence, 4 dice went into the curse of arrow attraction (foolish, since there were no more dispel dice, but hey, it's a learning game!).

DISASTER! 3 6s and a 1. and a 4 on the miscast table, coupled with his foolishness in not saving himself from the predations of the warp, meant that he had to go deal with Tzeentch all on his own. Oops.

The SpearElves ran up the hill, calculating that they had at least one turn to turn around and face the enemy. The prince flew forward and sat on the crossroads, facing the threat of the Chaos Lord and knights.

The foolish shadow warriors tried to 'outflank' the chaos knights in trying to get out of their line of sight. (a shout for that new LOS arrow template. It was very useful.) They didn't succeed, and the Nurgle Knights charged in. The new rules of charging over obstacles proved to make the battle much more fluid. No more being held up by random rocks and trees. If you dared, you could. The Chaos knights lost two to broken horse legs... but charged successfully into the Shadow warriors. The Chaos Lord charged the Swordmasters, and hurt himself jumping over that stone wall.

Swordmasters. Do not engage would be the new rule. they may have been of minimal worth being charged in the past. Now, with ASF + I5, they will almost always have re-roll misses with their attacks. Even though ASF is negated by great weapon's ASL, the bonus of re-rolls does not seem to be affected. (we could be wrong, we did think about it, and it didn't feel wrong.) So, said Chaos lord, having challenged the puny champion into running to the back (no loss of attacks now!), had to face both the front and 2nd rank swordmasters. 2As each + 1 additional from the back rank meant he faced 15 attacks with reroll misses. Even with the ward saves and improved armour save from his mount, he was to take a wound, (rather magical rolls actually)... and won the combat with 3 dead.

Steadfast? sure. the swordmasters barely broke a sweat, with the prince's Ld10 telling them to stand still and fight.

On the far end, the Chaos knights, distracted by all the steeple chasing, made a mess of their attack, killing only 3 shadow warriors. Rolling a 3 for their break test meant that the warriors held. (we forgot about the fear test at the start of that combat, but now, at least, you don't break from fear anymore.) 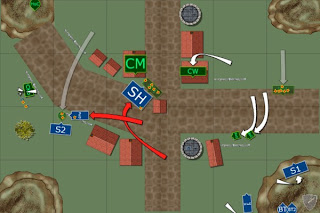 Here's where the new rules really made a huge difference. The silver Helms were 'blocked' from charging the Marauder horsemen by the wizard's tower(outhouse besides the well?). Well, the new rules say you can charge. You just take dangerous terrain tests for those that would go through the offending terrain piece. And, there was a debate on whether if we start in the flank, but cannot charge the flank (since it was anchored by an outhouse!), can we charge the front? We decided we could, hopefully future rule clarifications won't overrule it.

So, Bob ran into the outhouse; the rest of the 11 SilverHelms charged successfully into the Marauder Horsemen. Meanwhile, the Elf Prince thought the Chaos Lord was the bigger threat (wrong!) and charged him, almost clipping the dragon's toenails against another stone wall. (these dangerous terrain tests are proving dangerous!)

In that combat, well, with a poorly equipped elf prince, he lost his head to that one last attack from the daemonic mount. And the Dragon who then turned stupid was just smart enough to kill the Chaos Lord. On hindsight... the prince should have gone for the Chaos Knights, as another 15 S5 re-roll misses attacks from the swordmasters would have killed the Chaos Lord's last wound anyway!

On the right, not much happened. The Chaos Warriors decided that, curse or no curse, marching towards two elven bolt throwers wasn't the way to glory, and sought to "garrison" the other building. 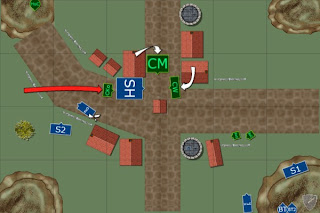 Needing 10s on 3d6(highest two), the Chaos Knights successfully negotiated the dangerous terrain, and charged the SilverHelms in the rear.

What a mistake reforming to 5 wide was, as Bob's brother "Bubba" formed the 3rd rank, and was just in range for the Chaos Knights' charge to hit. Oh well. Truly.

The Chaos Marauders came out of the building, and so did the Chaos Warriors. If the Silver Helms held, they were ready to throw their weight into the combat. However, the Chaos Knights were too good, killing 5 of the knights, putting them to flight, and securing the win.

Break Point 2: Chaos 3, High Elf 2. High Elves lose.
Conclusions:
1. We didn't have any arrow units, so were unable to test out volley fire. From mathhammer, Lothern Sea Guard might become the new favoured core unit... able to put put punishing volumes of shooting, and even more numerous attacks when charged (with ASF! and reroll misses).

2. Charging through terrain makes a big difference. Something 7th Ed players will have to learn to deal with. Protection via terrain is no longer as solid as one thinks.

3. Flying dwarves. 15" charging dwarves might now become a common sight. 2d6 + M can result in many interesting charges. Cavalry charges are not as far comparative to infantry now, with infantry's average charge range going up to 11, and Cavalry sitting at 15" even with their re-roll. A difference of 4-5" in infantry V cavalry is way significant from previous edition's 8"v14"+ (6"++)

4. Magic is truly risky. Boom. 200 points lost in one turn. Could have been worse if he was inside a unit. the large S10 blast template would have mangled that unit too. Archmages and irresistable force? ouch. Ignoring miscast magic items are now very powerful.

5. Missions - missions. missions. Remember the mission. The banner-ed units should have all climbed into garrison-able buildings for defensive sake, and left the killing to the other units (though that would have made the game fall flat, as nobody would have been able to dig anyone out at all, since monsters cannot attack buildings... though Chaos knights on foot might have still dug elven infantry out of buildings.)

All in all, the random terrain effects makes for more fun. The new 8th adage - you want fair and unrandom? go play chess. The rest of us just want to see dragons tearing into large units and making men fly.